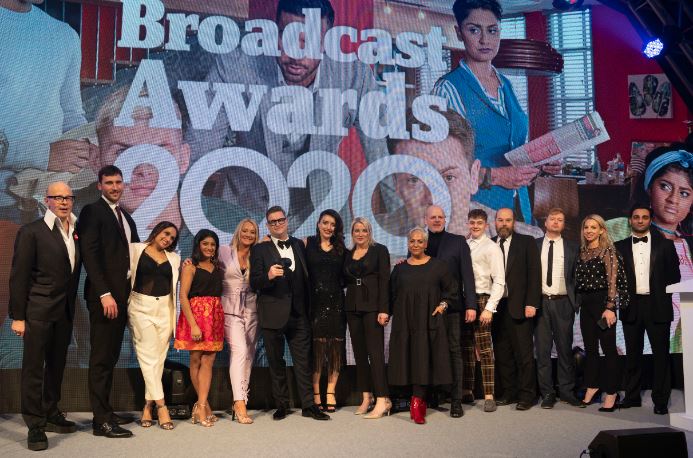 Hollyoaks was recognised at the Broadcast Awards last night in London, winning the award for Best Soap or Continuing Drama.

Submitted episodes featured a story about Far Right Radicalisation with judges saying calling the C4 flagship soap: “The soap most willing to take on challenging issues and do them justice, with clever character development”.

Hollyoaks were up against Coronation Street, Emmerdale, EastEnders, Casualty and Holby City and in the same category.

Over the past year, Hollyoaks have explored the issue of radicalisation in to Far Right Extremism, which saw much-loved character, Ste Hay, played by Kieron Richardson, being targeted and groomed.

Hollyoaks worked with Prevent, the Home Office and group Exit UK during the storyline, which ran for over a year and was the first time that the subject had been explored in continuing drama.

He said: “We are delighted to be recognised as Broadcast's best soap, particularly in a year which saw Hollyoaks be the first continuing drama to tell a story about Far Right radicalisation.

This long-running story was a team effort that required the collaboration of every department in Hollyoaks. It was meticulously researched, sensitively portrayed by the actors and delivered with outstanding production values.

I'd like to thank the writers Jayshree Patel and Kevin Rundle for writing the extraordinary episodes that led to this award”.

Broadcast award judges said Hollyoaks ‘Was widely lauded for tackling the trickiest of topics, including a flagship episode on far-right extremism, as it approaches its 25th anniversary.”

Adding: “As Hollyoaks moves into its quarter century on air, the show can safely say it has become a master at capturing these key themes for the masses.

“The show succeeded in communicating the dangerous impact that racism can have on people’s lives.

“The soap most willing to take on challenging issues and do them justice, with clever character development”.

“The show succeeded in communicating the dangerous impact that racism can have on people’s lives.”

Writer Jayshree Patel said “It was an absolute honour to be part of the team that brought this story to homes across the country.

“As writers it was important for Kevin Rundle and I to present the story from Ste’s reality.

“Telling the story of how a loveable working class lad is drawn in to by the Far Right allowed us to explore wider issues such as grooming and the power of social media.

“The story also allowed us to show the impact of racism on families. It’s so important to be able to show the sheer complexity of people’s reaction to racism and understand that ethnic minorities are not one homogenous group who think the same and are the same.”

She added: “Hollyoaks fans mean the world to us and to see them moving from loving Ste to hating him to, in the end having empathy with him was a journey we wanted them to take.”

One judge called it a “brave and current story told will, breaking some conventions, while staying true to Hollyoaks’ style and ethos”.

Hollyoaks is on Channel 4 every week day at 6:30pm and on First Look E4 at 7pm